We talk with María Mascaraque from Euromonitor International on how plant-based alternatives continue to make headway as an increased number of consumers choose vegetarian, vegan & flexitarian lifestyles.

The term ‘flexitarian’ has grown in popularity to describe people who have a primarily vegetarian diet, supplemented with dairy, and occasionally meat.

Despite the hype and sustained growth seen in the last years, the plant-based alternatives market remains small compared to its animal-based counterparts. In addition, despite the perception, the health credentials of many of these plant-based products are questionable. This can bring opportunities to the dairy aisle such as highlighting dairies superior nutritional value.

The reality is plant-based & dairy offerings can co-exist, finding a balance that incorporates both. Many consumers are not dropping animal-based products from their diet completely so we can learn a lot about consumer needs from this growing plant-based market, and how dairy has a role to play in a balanced diet.

Understanding the Highs & Lows of the Plant-Based Market

The adoption of plant-based alternatives varies globally, and in general, the size of this market remains relatively small in comparison to dairy.

The retail sales value of milk alternatives in 2020 compared to USD $120 bn for cow's milk.

Western countries are the most established markets for dairy alternatives and the driving force of the plant-based trend. In these geographies, dairy categories have been challenged in recent times, with the example of cow’s milk declining at a -2.3% in the US in 2019.

However, regions like Asia Pacific follows opposite trends, with categories like cow’s milk and drinking yoghurt set to deliver 4% and 5% CAGR (2020-2025) respectively in APAC.

It is also worth noting that not all plant-based alternatives have equal reputations.

Examples such as soy coming from genetically modified crops, and it being highly allergenic have deteriorated its image in the last few years. Soy’s slow performance, and especially the steep declines in the US, are set to continue due to the worsening reputation of soy in general and the lack of innovation in the category.

On the flip side, almonds, oats, cashews and coconuts have spurred innovation in recent times and consumer’s growing interest in these options will result in the availability of non-soymilk alternatives widening further.

It’s interesting to note that in reality, though the plant-based market is growing, the majority of consumers are not necessarily dropping animal-based products from their diet completely. In fact, our research shows only 3.4% of the world’s population follow a purely vegan diet. Instead, the majority of consumers occupy a middle-ground that choose both plant-based and animal-based proteins. 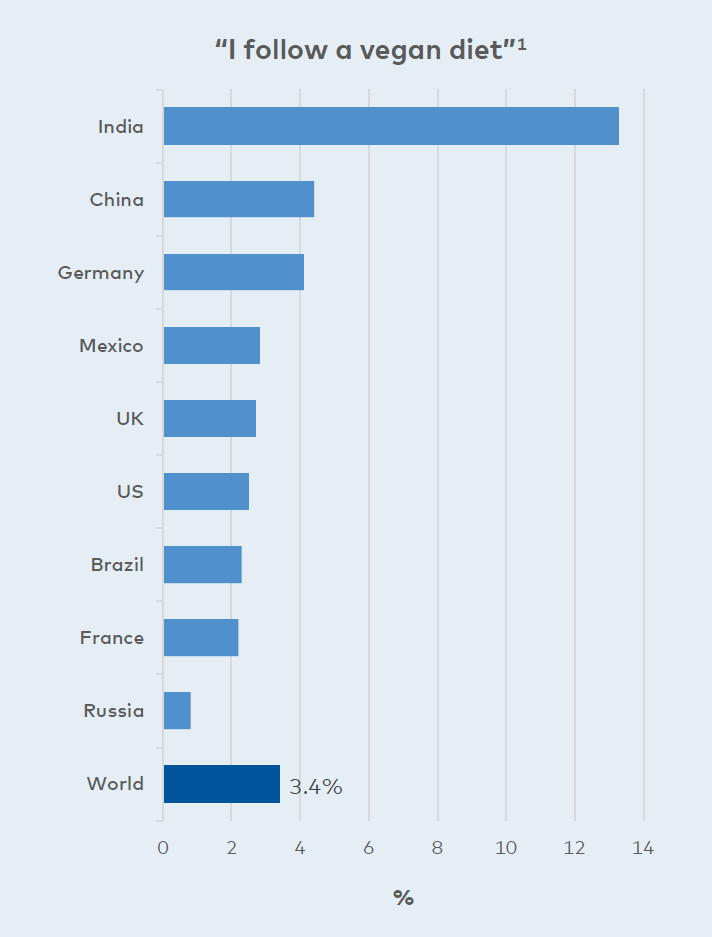 The main motivators behind consumers opting to increase their intake of plant-based products are health and digestive reasons. The emergence of the global pandemic has boosted consumer interest in being healthy, benefitting plant-based eating trends.

Looking into this deeper, the raw plant-based ingredients (e.g. coconut, oats, almonds) are known for supporting health and containing valuable nutrients, however, when used to make plant-based milk, yoghurt, ice cream and cheese, the end product is generally heavily processed. The lack of consumer awareness that they are so processed have helped to accelerate the plant-based alternative trend in times when health has taken precedence.

However, the most widespread plant-based alternatives (soy, almond, coconut, rice and oat) are a lot less nutrient-dense than cow’s milk and are generally heavily processed.

There is very little consumer awareness of this, but it might represent one of the biggest challenges in the future.

As you can see in Figure 1. the Protein concentration and nutritional quality of cow’s milk outperforms all plant-based variants.

Minerals and vitamins, particularly calcium and vitamin B12, are also significantly superior in cow’s milk, which is why plant-based alternatives tend to be fortified to be nutritionally competitive. This means longer lists of ingredients and heavy processing.

What should the dairy industry learn from the plant-based alternatives market?

The rise of plant-based dairy alternatives is primarily being driven by consumers perceiving them as a healthy option, yet these products generally contain lengthy ingredients lists. This clashes with the increasing demand for “all-natural” and clean label foods.

The dairy industry should focus on educating consumers on its superior nutritional profile and its clean label nature to win back consumers that are driven by health credentials.

Another key argument behind the rise of plant-based diets is its more sustainable and environmentally friendly positioning. In this front, several dairy manufacturers have sought to define their corporate strategies around the topic of sustainability. This involves going beyond individual claims, such as organic, and encompassing a more holistic perspective, including animal welfare, biodiversity and climate (Co2 reduction). These areas will continue to be in the spotlight so ongoing focus on producing more sustainably sourced dairy will be essential to compete with dairy-alternatives and for long-term success.

Combining both angles, some manufacturers have innovated to launch blends of dairy + plant-based alternatives to maintain good nutrition and taste from cow’s milk while bringing sought out plant-based ingredients like oats and almonds which also helps to reduce the carbon footprint of the product.

Plant-based dairy continues to surge in popularity driven by health perception and changes in consumer beliefs around sustainability and animal welfare.

Dairy is however nutritionally superior and more “clean label” which should be highlighted in times when health is front and centre.

There is an opportunity for the dairy industry to educate consumers about the nutritional benefits of dairy. Sustainability credentials should also be in the spotlight when looking to engage with consumers seeking environmentally friendly foods.

The reality is dairy and plant-based alternatives can co-exist in consumer diets, which is why it's important to understand the demand behind this growing plant-based trend. The ultimate opportunity is a Dairy/Plant-based blend, which is an untapped opportunity in the West, positioned as an added value dairy offering.

María Mascaraque is an industry expert in food and nutrition, contributing to the content and quality of Euromonitor International’s global food industry research.

María focuses on developing thought leadership by providing global expertise and forward-thinking insights, identifying key market trends and the latest product developments in the food industry. María is a regular speaker at leading conferences and events.

She holds a PhD in Nutrition from Complutense University, Spain

How Whey Can Help Boost Your Immunity