Protein: A Deep Dive Into Our Body's Building Blocks

Explore the benefits of protein and how you can optimize them for your health and nutrition goals.

Protein is one of the body’s three major nutrients, alongside carbohydrates and fats, forming the basic building blocks of our bodies. Historically, it has been associated with the diets of bodybuilders and professional athletes; however, protein has now transitioned to the mainstream, with consumption increasing among everyday, active consumers.

Despite the growing awareness and consumption, there are many myths about protein that may result in nutritional decisions that hamper fitness goals and undermine your body’s full functional capabilities.

Debunking the myths of protein

1. All protein is equal

When it comes to protein, quality is far superior to quantity. Proteins are made of smaller units called amino acids. Of the 20 types of amino acids found in the diet, nine of these are classified as essential, because our bodies can’t produce them. As a result, we require a regular supply of such amino acids from the diet to support and sustain growth, development, and function.

Dietary proteins can be separated into two categories, complete and incomplete, based on their ability to provide different amino acids.

Complete proteins provide all essential amino acids at the levels required by the body. One of the best sources of complete protein comes from dairy and common dairy ingredients, such as milk protein concentrate, casein, and whey protein. They can be readily fortified into everyday foods and beverages for ease of consumption, including frozen desserts, soups, and nutrition bars.

Dairy proteins are the highest scoring protein source based on the availability and digestibility of essential amino acids.

Although proteins are available in several food sources, approximately one billion people globally have inadequate protein intake1. While this is partly due to limited access to food, a separate study conducted in the US revealed that regularly skipping at least one meal a day was one of the major reasons of low protein intake2.

Consumers who have typically struggled to integrate protein into their daily meals may find it easier today as developments in ingredients have enabled a greater range of products, providing them with more options for a quick nutrition fix.

In the past, the fortification of food and beverages with dairy protein often resulted in unappealing textures, such as rock-solid nutrition bars and chalky beverages. However, following years of research and innovation, it can now be found in various consumer products, from yoghurts and baked goods to ready-to-drink beverages, while still delivering a great sensory experience.

NZMP’s SureProtein™ Clear WPI 8855, for instance, was developed to provide manufacturers with an ingredient that would offer high nutritional value, while meeting new consumer preferences for taste and texture. This has seen dairy protein incorporated into non-milky beverages such as flavoured waters, juices, and carbonated drinks.

NZMP has been innovating in the whey protein space for over four decades.

Thanks to these developments, functional proteins can now be found in on-the-go nutritional products, complementing the hectic schedules of consumers who often have to skip meals but are still trying to reach their nutrition and health goals.

Learn more on how to incorporate SureProteinTM Clear WPI 8855 into ready-to-drink and ready-to-mix beverages. 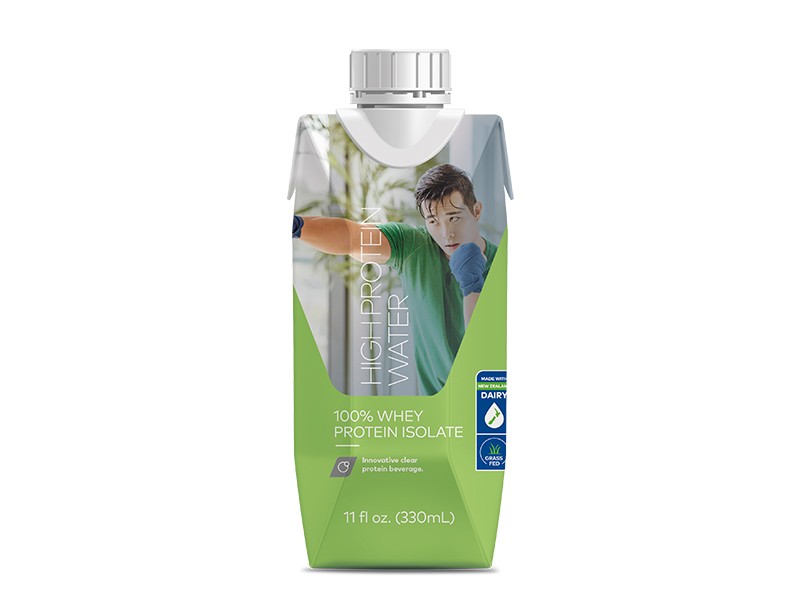 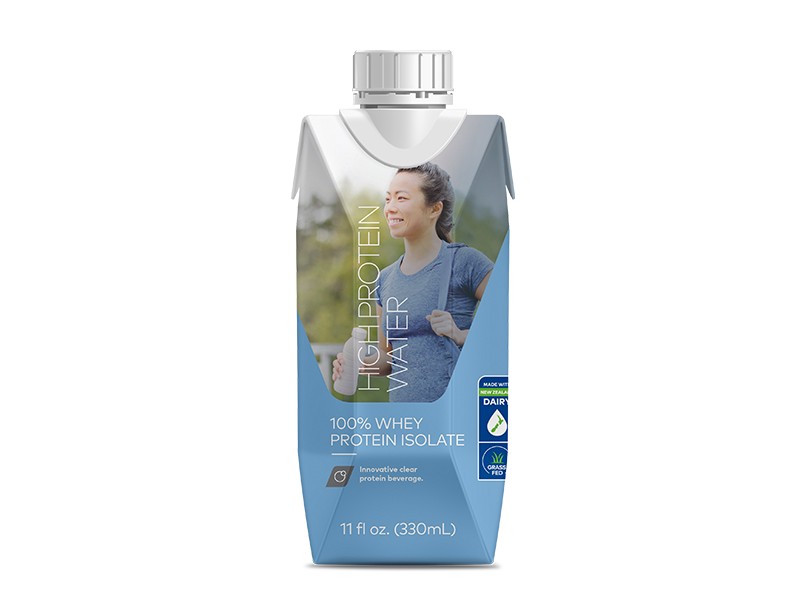 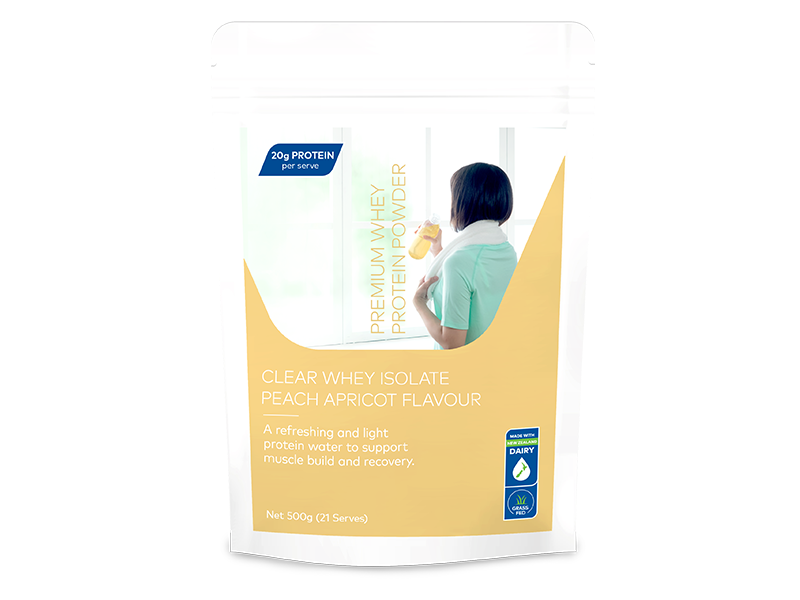 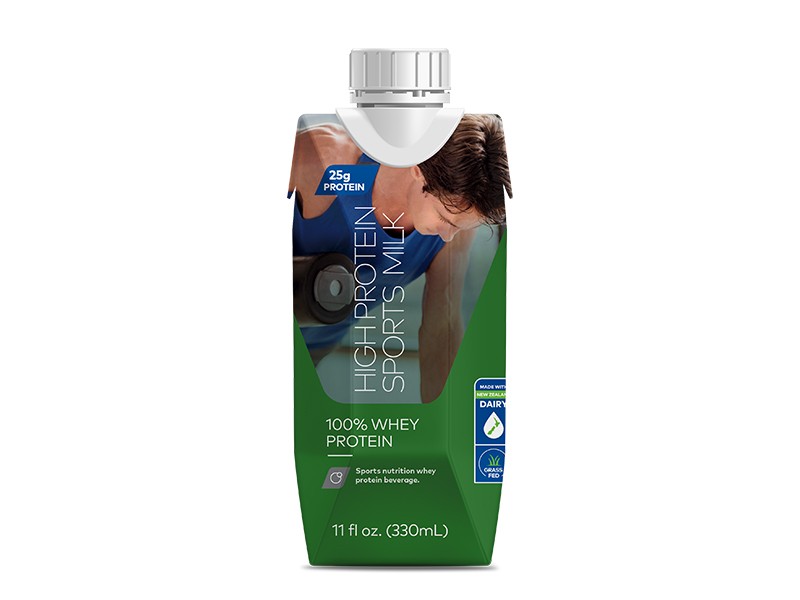 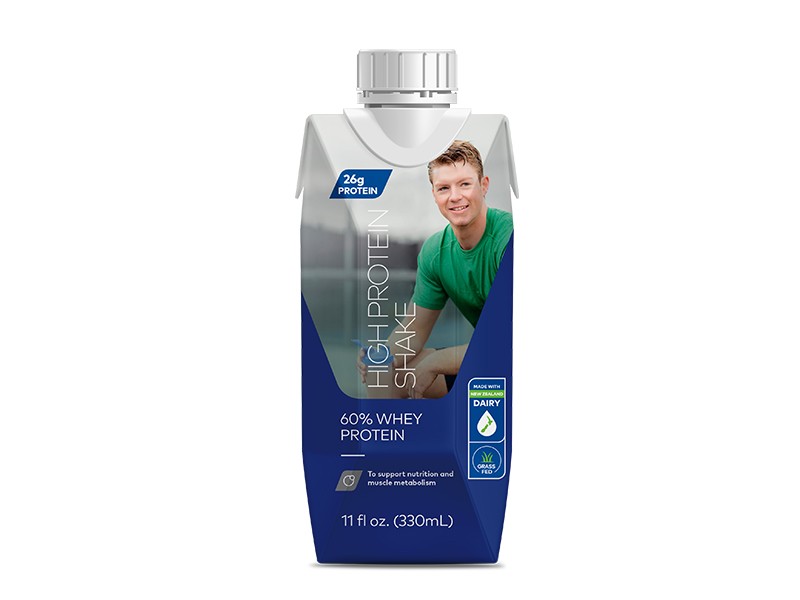 3. Age does not matter when it comes to protein needs

As children physically grow, their body weight, bone, and muscle mass increases, reaching peak development early in life. Thereafter, the body’s physical decline begins around the age of 403, with muscle mass starting to fall by up to 2.6 per cent every year4.

Due to the natural process of ageing, older adults experience skeletal muscle and strength loss (commonly known as sarcopenia), which leads to an increased risk of frailty, disability and less independence than their younger counterparts. On top of that, as you age, your body becomes less efficient at utilising protein, so more protein must be consumed to stimulate muscle metabolism, and to promote the retention and growth of muscles.

Uncovering the true benefits of protein

Consumers view protein as a valuable nutrient due to its ability to maintain overall health and wellness and see it as necessary for the body to work the way it should, thanks to its muscle performance and recovery benefits.

Yet, many are still unaware of the nutrient’s full range of scientifically proven benefits. In Indonesia, for example, close to half of consumers associate protein with general body wellness but lack awareness of its specific functional benefits5. Therefore, if consumers are to effectively harness the nutritional benefits of protein it is important that they understand how it can support their health and wellness goals.

Download the infographics below and learn more about protein: 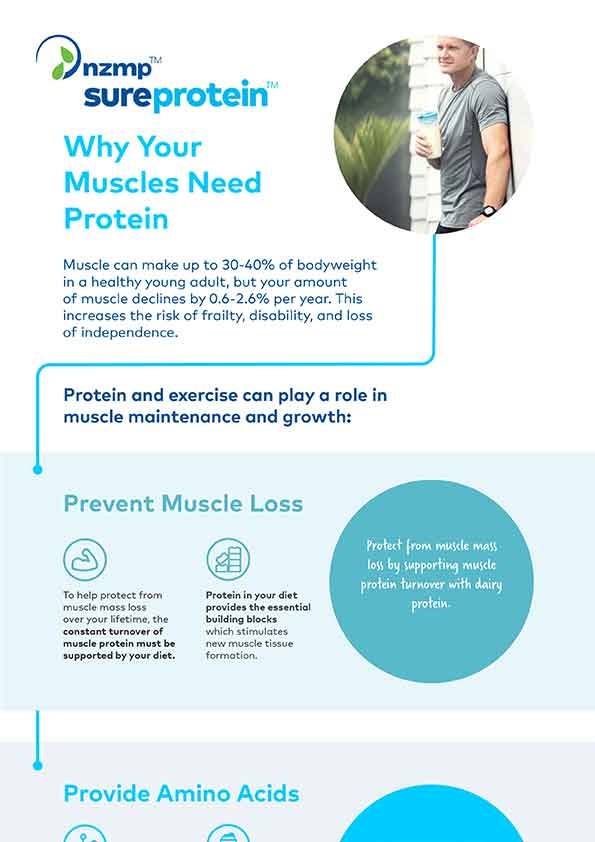 Why your muscles need dairy protein to support muscle maintenance and growth. 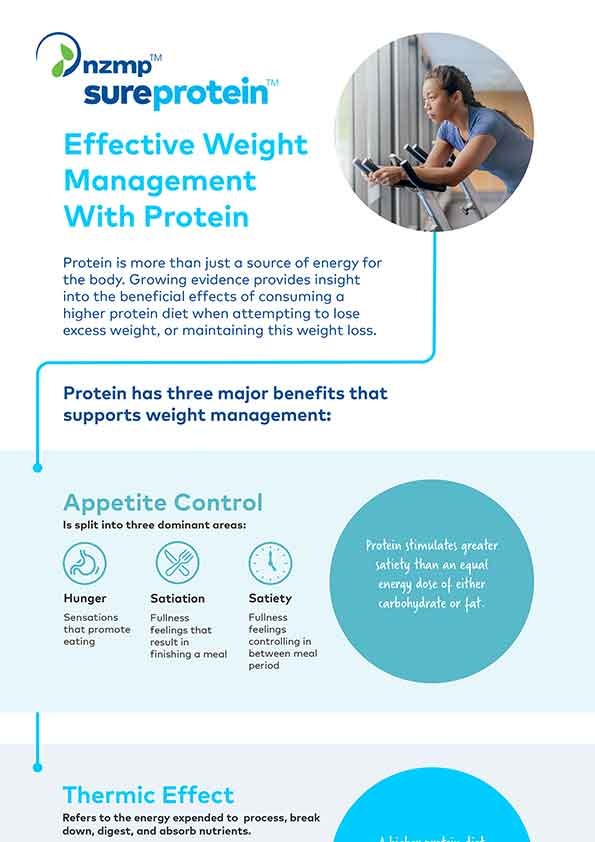 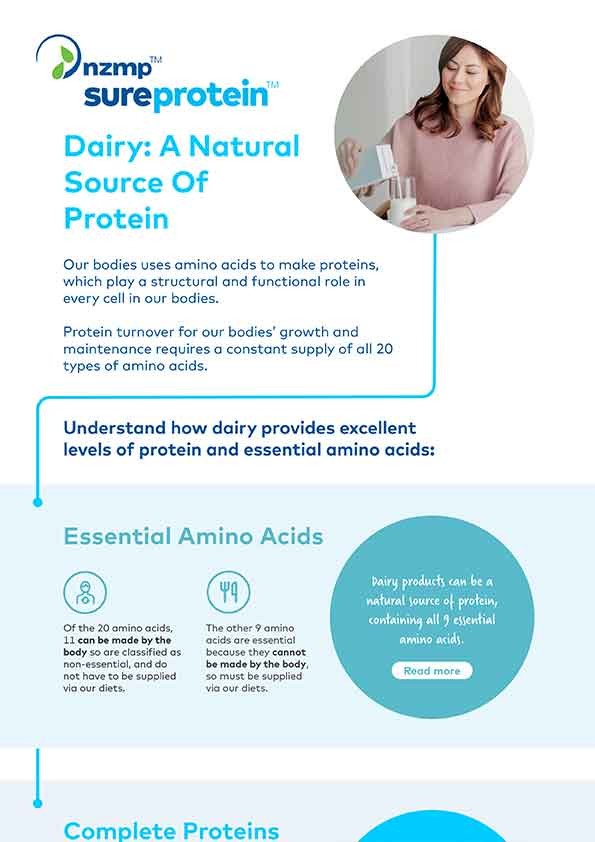 Dairy: A natural source of protein. 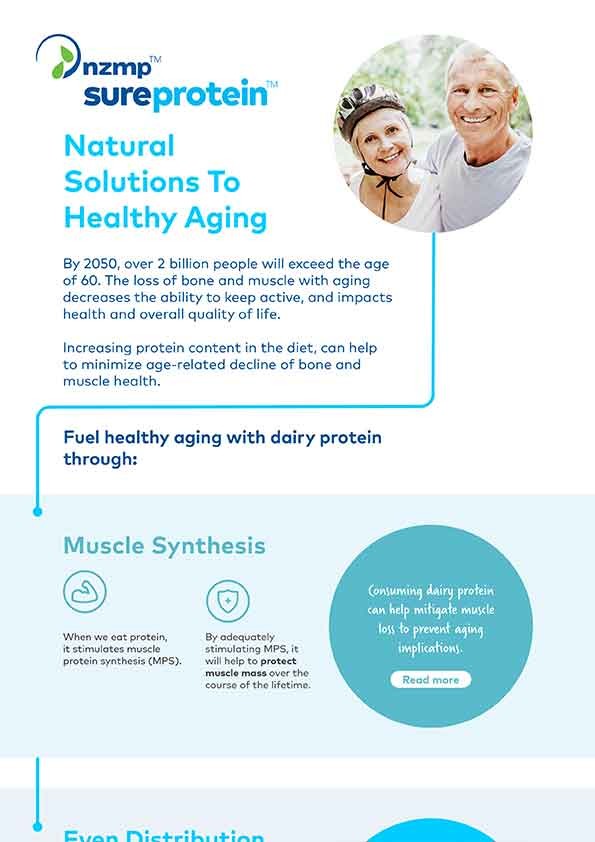 Protein is often touted as a key component to support healthy weight management as it increases feelings of fullness, more than carbohydrates and fat. A high-protein diet may promote lower energy intake through regulating appetite, which in turn leads to potential weight loss over time.

The timing of protein consumption also has a role in optimising its benefits. As there is a limit on the amount of protein the body can absorb in one go, spacing out intake across the day will optimise absorption while promoting a greater effect on fullness and energy intake6. In addition, consuming protein before going to sleep also helps to manage hunger throughout the night and provides the body with the needed nutrients to repair and grow while our bodies rest. It also supports sleep hormone pathways that help provide a good night’s sleep.

Along with reducing a person’s appetite, protein helps to boost the body’s metabolism by facilitating an increased thermogenic response to food consumed.

While macronutrients such as fats and carbohydrates also induce a thermogenic reaction, protein stimulates the response more significantly, by up to 30 per cent7. As a result, those who adopt a high-protein diet are expected to be able to increase daily energy expenditure and consequently, fat loss.

Dietary induced thermogenesis is commonly defined as the increase in metabolic rate after ingesting a meal. It can help to burn body fat as calories are expended automatically instead of being stored in the body.

The benefits of protein intake go beyond physical health – it can also have an impact on our mental wellbeing due to its ability to stimulate healthy neurotransmitter activity that in turn supports mood, cognitive performance, and sleep. Some amino acids found in proteins such as tyrosine and tryptophan have been found to play an important role in the production of neurotransmitters and when these natural chemicals in our brains are lacking, it may lead to low mood and aggression8.

Tryptophan specifically is able to raise serotonin and melatonin levels, which have been found to help improve the quality of sleep and as a result, enhance cognitive performance9,10.

Tracing the journey from waste to whey protein

The exact protein requirements for each individual depends on their life stage, levels of physical activity and overall health. Consumers are generally recommended to increase their protein intake with age and the onset of certain disease states, as well as physical activity.

Healthy adults with modest levels of physical activity aged between 18 and 64 years old are recommended to consume at least 0.83g of protein per kg of bodyweight every day to meet the minimum amino acid requirements for body tissue repair. This guideline, determined by the World Health Organisation (WHO), the Food and Agriculture Organisation of the United Nation (FAO) and the United Nations University (UNU)11, suggests the minimum amount you need to consume to avoid deficiency — not the specific amount you are supposed to eat every day.

In addition to guidelines from globally recognised nutritional organisations on our bodies’ minimum protein intake, various studies have explored and provided recommendations on the optimal consumption amount across different life stages.

Regardless of which age group you fall in, whether you are an athlete or someone trying to build muscle, protein is a crucial component of a balanced diet. Meeting your protein needs can easily be achieved from eating a variety of foods, including dairy products, allowing you to meet your desired health and nutrition goals.

Explore our protein infographics series to understand more about protein.

Inflation in Asia-Pacific and Advice for Brands

Commodity Market Trends & the Implications for the Dairy Market

Why Dairy Nutrition is Critical for Mobility

Whitespace for Innovation in Nutritional Products

Meet the team in Japan

How Whey can help boost your Immunity

ESPEN 2021: The Impact of Nutrition on Patient Care

One Milk Powder, Many Opportunities to Satisfy the Needs of Your Consumers

Premium performance and packed with the nutrients everybody needs