NZX and SGX partner to grow liquidity in dairy derivatives together

The planned listing of NZX’s dairy derivatives on the Singapore Exchange (SGX) later this year will unlock and accelerate the distribution and growth potential of the market – with clear benefits for dairy customers around the world.

The partnership brings together the complementary capabilities of the NZX and SGX to scale up market distribution and liquidity in the global dairy derivatives markets. As part of the new partnership, NZX intends to delist its suite of dairy derivatives contracts from the NZX Derivatives Market in November, and equivalent contracts will be exclusively listed on SGX from 29 November 2021 under the name SGX-NZX Global Dairy Derivatives.

This means the market is more accessible than ever, with the SGX providing global market connectivity, a strong Asian presence and international distribution to around 70 trading and clearing member firms and 28 independent software vendors.

NZX will continue to provide dairy product development expertise, market research and product support for new developments and enhancements, as well as lead engagements with the dairy industry. 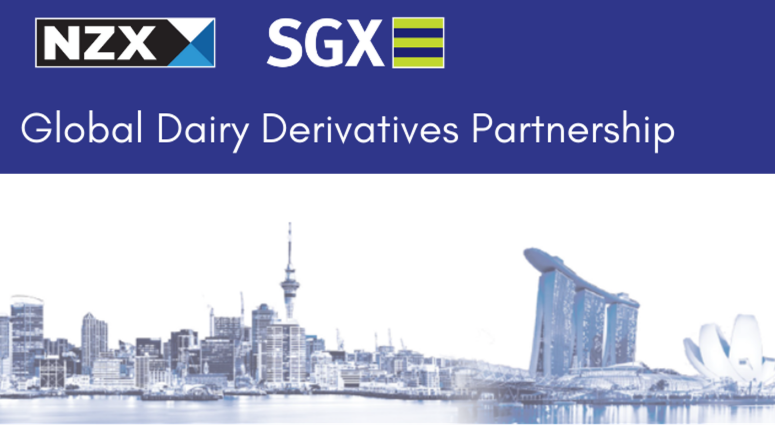 This is an exciting development, and if you would like to speak to the NZX or SGX about how you can access the benefits of the new SGX-NZX Dairy Derivatives contracts suite – please use the following contacts:

Below are some key Frequently Asked Questions. You can also find out more about the upcoming partnership and contract transfer process at the link at the bottom of this email.

Q: What does the partnership mean for my existing positions?

A: NZX & SGX intend to follow a mandatory transfer approach to close-out existing open interest positions held with NZX Clearing, and re open new positions with SGX. Positions will be closed out using the NZX Daily Settlement Price (DSP) on the last trading day before transfer for futures contracts and zero premium for options. This will result in the re-opening of positions on SGX that replicates the terms of those existing positions to the maximum extent that is reasonably practicable.

A mandatory approach was chosen to ensure the transition is efficient and equitable for end-users. If end-users do not wish to have their existing open interest positions transferred to SGX, they have the opportunity to trade out of their NZX positions before 26 November 2021. SGX will launch comparable contracts to the existing NZX dairy derivatives on 22 November (subject to due regulatory process) and allow trading of these contracts from 22 November. NZX will cease trading of the NZX dairy derivatives by placing the market into halt (likely COB Thursday 25 November). There will be no trading of dairy contracts on either NZX or SGX on 26 November.

A: As part of the partnership, all clearing activities will be managed by SGX’s derivatives clearing house – SGX-DC. Due to operational differences between the two Clearing houses, margin requirements differences may emerge. The margin rates from SGX-DC will be published in a Circular to the market participants released ahead of the position transfer to SGX.

Q: What will the trading hours be?

A:  Trading hours will be between 7.25am – 6.00pm SGT, effectively closing before midnight during New Zealand Standard (NZST) and Daylight Savings (NZDT) time. A breakdown of SGX’s trading session types, times and equivalent New Zealand times can be found here.

To read the full Q&A document on the partnership, view here.